NASA’s Cassini spacecraft has detected hydrogen molecules in the geysers shooting off the moon Enceladus, possibly the result of deep-sea chemical reactions between water and rock that could spark microbial life, scientists announced Thursday.

NASA and others are quick to point out this latest discovery does not mean there’s life on Enceladus (ehn-SEHL’-uh-duhs), but that there may be conditions favorable for life.

A liquid ocean exists beneath the icy surface of Enceladus, which is barely 300 miles (500 kilometers) across. Scientists have long known about the plumes of water vapor spewing from cracks at the moon’s south pole, thanks to Cassini . The heavy presence of hydrogen suggests chemical reactions between the warm water and ocean-floor rock that could support life.

Cassini uncovered the hydrogen during its final close flyby of Enceladus in 2015, when it dove deeper than ever through its plumes of vapor and particles. The researchers reported that the hydrogen, along with carbon dioxide that was also found, could mean that undersea microbes are producing methane as they do in the bowels of our own oceans and waterways. 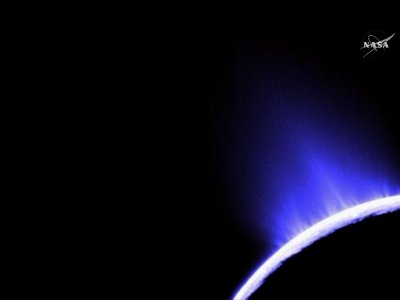 “It really represents a capstone finding for the mission,” said Cassini’s project scientist, Linda Spilker, noting that the spacecraft has been circling Saturn for more than a decade.

“We now know that Enceladus has almost all of the ingredients that you would need to support life as we know it on Earth,” she said at a NASA news conference.

A press conference viewer, asking questions of the scientists via Twitter, asked if NASA was talking about bacteria or algae — or giant squids.

“Most of us would be excited with any life,” said Mary Voytek, an astrobiology senior scientist for NASA. “We’re going to start with bacteria and, if we get lucky, maybe there’s something that’s larger.”

The findings were reported Thursday in the journal Science by a team from Southwest Research Institute in San Antonio.

Launched in 1997 and now finally running low on fuel, Cassini is drawing ever closer to its demise. The spacecraft will duck through the gap between Saturn and its rings 22 times before spiraling out of control and vaporizing in the sky above Saturn this September.

Cassini has no instruments that can detect life, so it will be up to future robotic visitors to seek out possible life on Enceladus, the scientists said. 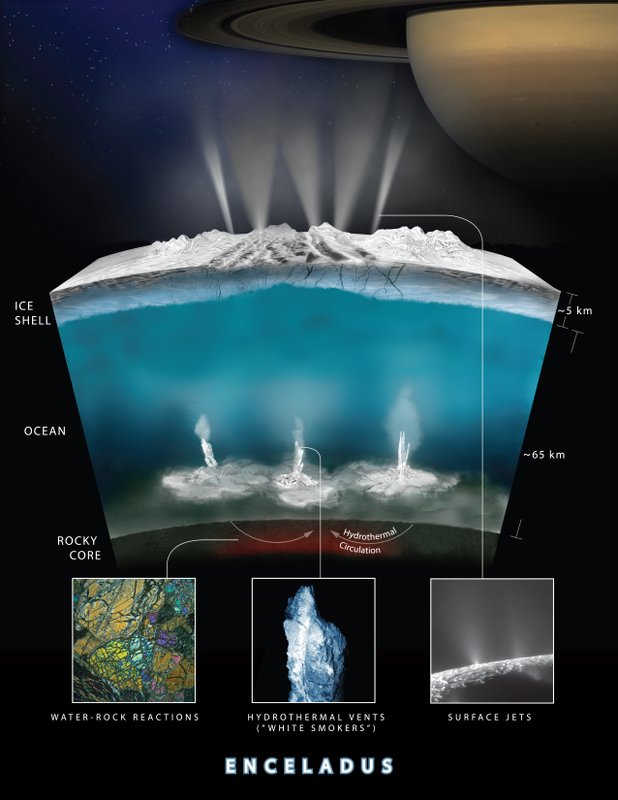 This illustration provided by NASA shows what scientists on the space agency’s Cassini mission theorize how water interacts with rock at the bottom of the ocean of Saturn’s icy moon Enceladus.

Europa, an ice-covered moon of Jupiter also believed to have a subsurface ocean, may have water vapor jets spewing into space as well, similar to Enceladus. The Hubble Space Telescope has observed what looks to be plumes emanating from Europa. A spacecraft under development called the Europa Clipper, to launch sometime in the 2020s, could shed more light on the matter.

Voytek said her money is still on Europa for potential life, versus Enceladus, since Europa is much older and any potential life there has had more time to emerge.

“We still have a long way to go in our understanding,” said Seewald, who was not involved in the study. “Future missions to explore oceans beyond Earth will answer many of these questions.”