Skip to content
President Donald Trump signed a bill into law on Tuesday that authorizes $19.5 billion in NASA funding for the 2018 budget year and adds human exploration of Mars as an agency objective, The Associated Press reports.

Trump signed the NASA Transition Authorization Act as astronauts and the bill’s sponsors, including Sens. Ted Cruz (R-Texas) and Marco Rubio (R-Fla.), looked on. The new law allows NASA to redouble its deep space exploration efforts and develop a manned mission to Mars.

The Trump administration released a preliminary budget last week that proposed a $19.1 billion budget for the space agency next year, down $200 million from the current budget of $19.3 billion. However, Tuesday’s bill reversed course, boosting NASA’s budget to $19.5 billion for the 2018 fiscal year, which begins October 1.

“I’m delighted to sign this bill,” Trump said. “It’s been a long time since a bill like this has been signed, reaffirming our national commitment to the core mission of NASA, human space exploration, space science and technology.”

“With this legislation, we support NASA’s scientists, engineers and astronauts and their pursuit of discovery,” he continued, adding that the new legislation would support jobs. “This bill will make sure that NASA’s most important and effective programs are sustained.” 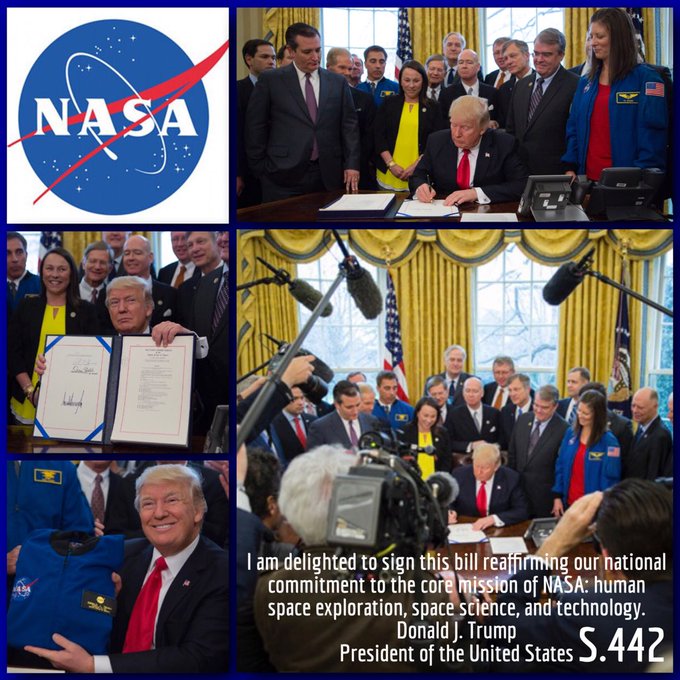 Honored to sign S.442 today. With this legislation, we support @NASA‘s scientists, engineers, and astronauts in their pursuit of discovery!

Sen. Bill Nelson (D-Fla.), who spent six days orbiting the earth aboard the space shuttle Columbia in 1986, stood beside Trump during the signing ceremony.

“It puts us on the dual track,” Nelson said. “We have the commercial companies going to and from the International Space Station and we have NASA going out and exploring the heavens. And we’re going to Mars.”

While NASA was largely spared from major funding cuts, Trump’s preliminary budget also proposes to slash funding for other environmental and science agencies.

The Environmental Protection Agency faces a 31.4 percent funding cut under the new budget proposal, which would also eliminate spending on the U.S. Agency for International Development’s Global Climate Change Initiative and scale back the use of satellites to monitor polar icecap melt by the National Oceanic and Atmospheric Administration.